Can you distinguish the taste of a red wine versus a rosé? How about the look of a 1960s muscle car versus a foreign import? Do you prefer to grow lilies or tulips? Would you rather listen to Dark Side of the Moon or “Fly Me to the Moon”? To answer any of these questions, you need to use your semantic memory.

Your semantic memory is your store of factual knowledge of the world and the meaning of words. It’s how you know that a fork is for eating (not twirling your hair) and what color a lion is. It’s both the source of your vocabulary and how you know what something does even if you don’t know the name of it — like that little bit of plastic that covers the end of a shoelace (an aglet).

Use episodic memory to increase your semantic memory

To form new semantic memories, you need to use your episodic memory to learn new information. For a week, month, or year, you might remember where you were and what you were doing when you learned a new fact. Over time, however, you will forget the context and just remember the fact. Once only the fact remains, it is part of your semantic memory.

Several landmark papers have examined where semantic memory is stored in the brain. In 1996, two related studies were published in an article in Nature.

For the first, the researchers enrolled over 100 patients with strokes and other brain lesions in their left temporal lobe. (Put your finger on your left temple, just behind your eye — that’s where the left temporal lobe is located.) They asked these patients to name famous people, animals, and tools that were man-made objects. They found that the location of brain lesions affected recall. Patients with the most anterior lesions (close to their eyes) had the biggest difficulty naming persons. Patients with the most posterior lesions (toward the back of head) had the greatest difficulty naming tools. And those with lesions in between these areas had the most difficulty naming animals. 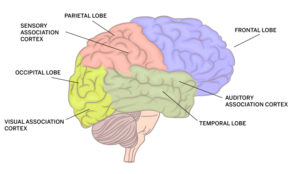 In the second study the researchers had healthy adults name famous people, animals, and tools while undergoing a positron emission tomography (PET) scan that showed brain activity. As expected, naming people yielded the most anterior activity, tools the most posterior activity, and for animals the activity was in between.

Dementia may erase words from the dictionary

More recent research links deterioration of the anterior temporal lobe to the difficulties understanding what a word means exhibited by people with some types of dementia. Although people with Alzheimer’s disease most commonly exhibit this abnormality, it is most prominent in a type of aphasia known as semantic dementia. When you speak with these individuals, they may start off sounding normal, but you will notice that they refer to all sorts of different items as the “thing” or a similar word. As you talk with them further, you will discover that they do not know what certain words mean, such as “medicine” or “shoe” — two examples from one of my patients.

Semantic memory in other brain regions

Semantic memory does not decline in aging

Can improving your semantic memory help you do a crossword puzzle? Yes. Not only does semantic memory store the meaning of words as well as nonverbal concepts, it also stores the relationships within and between words and concepts. For example, your semantic memory of the band Pink Floyd may be linked to the President of the United States in the following way: Pink Floyd’s album Dark Side of the Moon may be connected in your semantic memory to moon landings, which is then connected to astronauts, to John Glenn, to senators, to politicians, and to presidents.

Lastly, a bit of good news: research suggests semantic memory does not decline in normal aging. As you continue to learn new information throughout your life, your vocabulary and your ability to solve crossword puzzles may actually improve with age.

Why Police Officers Are Dying by Suicide

Yes, you can avoid weight gain over the holidays!